Palladium has become a hot trend in jewellery over recent years, as its silvery-white colour and lustrous finish are both perfect for jewellery. Some designers say that it has overtaken the more traditional precious metals such as gold and silver in popularity, therefore establishing itself as a luxury metal for jewellery making.

We are all looking for that illusive precious metal that will stand the test of time, which remains as beautiful as the day we first bought it, without costing a small fortune. Palladium seems to be the most recent answer to our quest.

Palladium has enjoyed, what can only be described as a meteoric rise in jewellery since the 1930s. It’s transformed from a little know metal which was largely unworkable, to being one of the top metal choices for engagement and wedding rings.

The history of Palladium

In the history of precious metals, palladium is a relative late bloomer to the world of jewellery. While silver and gold have been used in jewellery, and as a form of currency for hundreds of years, palladium has only really been respectfully recognised over the past decade or so.

To put this into perspective, gold and silver has been hallmarked since the reign of King Edward I of England in 1300. Platinum was only hallmarked in 1975, and palladium even later in January 2010. It appears being late to the jewellery table is the fashionable thing to do!

Like gold and platinum, palladium is alloyed with other metals to make it workable in jewellery. Generally the other metals are a mixture of silver, copper and zinc. In Burrells we offer the higher grade of palladium which is hallmarked 950, which means 95% of the metal is pure palladium.

This makes the precious metal both more valuable and hypoallergenic.

Palladium: The Element itself

Do you remember the periodic table from school? Well it recently celebrated 150 year of being in existence. Let’s recap on some chemistry to discover more about palladium.

William Hyde Wollaston is credited with discovering palladium in 1803, although there are allusions to its existence in South Africa, many centuries before Wollaston’s time.

Palladium is in a group of metals known as a noble metal, and was appointed the chemical symbol Pd. These metals are able to resist corrosion, are hard wearing and also stay bright and shiny. All great properties that lend themselves well to jewellery, don’t you think?

Platinum and palladium are often compared when making a choice of wedding bands, and it’s good to take a look at some of their differences. Palladium is only slightly darker than platinum in colour, however it is in their metal weight that the big difference occurs.

Platinum is a heavy metal, which can be very limiting when used in certain pieces of jewellery, such as earrings. The extra weight can cause discomfort, therefore the considerably lighter palladium is a great alternative metal choice.

Palladium is also generally less expensive than platinum, which is an added bonus!

These two metals share many of the same properties, such as high shine, highly scratch and dent resistant, and a natural lustre aesthetic. The specific gravity of platinum is 21.4 whereas palladium is 11.8, which means it will feel much lighter when worn. The larger the piece of jewellery the more noticeable this difference will be.

Both metals share the added benefit of being hypoallergenic, which means neither will cause skin irritation. Some people have a reaction to certain metals such as gold, due to the alloys it can be mixed with. This is of course something we all want to avoid.

How valuable is palladium?

The cost of palladium has increased considerably in the last few years, even substantially rising within the last year alone. This is due to the increased demand on palladium for catalytic converters used in the motor industry, in addition to the attraction it has received from the jewellery trade.

China has become a huge market for industrial palladium. This is due to recent new laws on emissions, that has influenced the increased need for the use of palladium, for it acts as a purifier in car exhausts.

Palladium also saw a significant rise in the United Kingdom usage for jewellery in 1939. As platinum was being used for the war effort, palladium became a natural choice for jewellery instead.

With platinum not only being used as a precious metal for jewellery, but also as the main alloy in the colouration process of white gold, its price naturally rose drastically. This surge in demand for platinum, in turn had a positive effect on the demand for palladium, which resulted in its price rising too!

We hold valuation days at Burrells and would be happy to book an appointment for you with an expert, who would be able to ensure your jewellery has an up to date valuation certificate for your insurance company.

At Burrells, we offer our beautiful range of wedding bands in several precious metals including platinum, gold and of course palladium. We are always happy to talk through your exact requirements and suggest what precious metal would be best suited to your lifestyle. 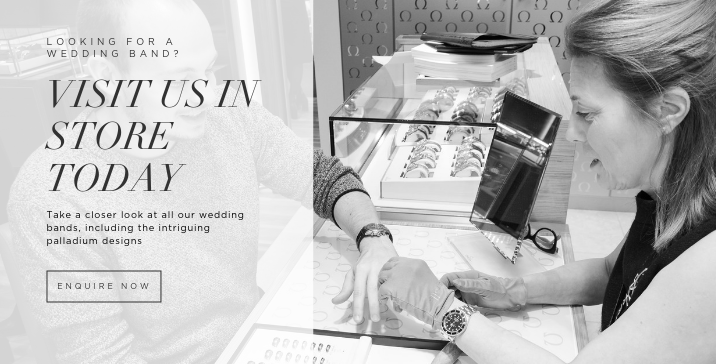 Our wedding bands are hand made to order by our trusted chosen partner, Brown and Newirth, who are a British company established in 1967, offering superior quality with a lifetime guarantee.

Why not have an engraving on the inside of the band, with perhaps a date or secret message? There is no extra charge for this, as it is all part of our service and commitment to making your wedding ring as special and unique as your wedding day.

Hopefully you are now as enthralled by palladium as we are! Please don't hesitate to visit us in store, and give this lucrative metal a chance to win you over.