The June Birthstone - A Closer Look At The Radiant Pearl

The beautiful pearl is the birthstone of June, and is the only gemstone made by living creatures. If you or a loved one are born in June, let us give you some background on the amazing pearl.

the history of the pearl

The name “pearl” comes from the old French world perle, and Latin perna meaning “leg”. The leg references the shape of an open mollusc shell, which resembles a leg of mutton. In nature, perfectly round and smooth pearls are rare, which has coined a modern expression of the word “pearl” to define anything rare and valuable.

Centuries ago, pearls may have been discovered while humans searched for food. Although they weren’t originally considered a gem, pearls have held a unique allure throughout history, for different cultures and religions have adopted pearls as a symbol of elite elegance.

Looking through history, we can see so many references to pearls in various forms. In the very early days of pearl discovery, they were believed to provide the wearer with mythical powers. Hindus and Arabs thought the pearls were drops of moisture that fell from the heavens, whereas some Greek mythology references to pearls as ‘tears of God’.

In modern history, we see pearls as a symbol of royalty and opulence. Portraits from different royal families around the world showcase the royal draped in pearls, and celebrities and fashion icons love them equally as much. Coco Chanel has been quoted saying:

Known for her feminine and classy style, the designer guru loved to style her pieces with lots of pearls. Coco showcases how easy and glamorous it is to build layers upon layers of jewellery, which is especially dramatic with a collection of pearl pieces.

Another fashion Icon of her time Grace Kelly once said:

"The pearl is the queen of gems and the gem of queens."

She was also known for wearing a lot of pearls with elegance and style. It's extraordinary to see a simple choker of pearls be such an iconic piece of jewellery!

There are some fun myths surrounding the pearl around the world, for example a Persian legend says that pearls were created when a rainbow met the earth after a storm. Ancient Egyptians were often buried with pearls because they were so valued.

How are pearls made?

We now know that pearls are more accessible to most of us, with various kinds of pearls in a range of different price points. They are cultured in farms, and although still a very long and skilled process, the pearl farming allows for better production and trade of these beautiful gems. The Japanese have found the muscle that would produce the best pearl, and they are big producers of pearls like Akoya which are some of the most expensive pearls you can find.

Pearls are one of the few gems that don’t need any cutting after production and they can be found in different shapes of oval, round, or teardrop. Have you ever wondered how pearls are made? Let us give you a short introduction.

Natural pearls form when an irritant such as a parasite or possibly a grain of sand, somehow make their way into an oyster, mussel or clam.

As a form of defence mechanism, there is a fluid called nacre that starts to form around this invader, layer over layer until the pearl is formed. Like stated above, years ago this was a work of nature, which meant pearls were so valuable because they were extremely rare and difficult to find.

Cultured pearls are farmed pearls, which means they have been produced in controlled conditions. They require a methodical process in order to be created.

Cultured pearls can be made in oysters or mussels, and the parasite is introduced by the farmer with a very small incision. It is a highly skilled and difficult task to do because it has to be done within 2-3 minutes, before the oyster closes.

After the parasite is introduced, they are put back in the ocean in individual mesh nets and are suspended from floating rafts. The oysters feed and grow in sheltered bays rich in natural nutrients. In the winter months they may be moved to warmer waters, which is the advantage to farming and gives the pearl a better chance at surviving.

From the millions of oysters that are nucleated each year, a very small fraction of them produce pearls that are high enough in quality to be gem material. About half of these oysters don’t survive. Less than 5 percent have pearls of ideal shape, lustre, and colour to be considered fine quality.

The next stage in the process, is to clean and sort the pearls. They are soaked for several days in a mild-solution, under intense fluorescent light. This ensures that any deposits, residue, or odour is completely cleared away.

After this, they are soaked once again in a wooden vat of finely crushed walnut shells. The natural oils from the shells provide a soft polish without harming the pearl’s surface.

Finally, the last step is to match the pearls. To assemble a single strand of pearls, workers must sort through thousands of pearls to find ones that are similar in size, shape, colour, lustre and surface quality.

Natural pearls are still found now and although rare, they are very much used in jewellery making. They were found in many parts of the world, but currently only available in the Persian Gulf Waters near Bahrain. Australia in fact owns one of the world’s last remaining pearl diving fleets and harvests pearls from the Indian Ocean. On the other hand, cultured pearls are a large business in China and Japan.

We have some beautiful pieces at Burrells for you to choose from! First though, we recommend taking a look at our YouTube video on pearl jewellery, which features 6 things you need to know about this birthstone before you buy:

Now you're ready to start pearl shopping, so let's take a look at our top 3 pieces for the June Birthstone.

Pearl studs are a beautiful classic jewellery piece, that flatters everyone and looks good with everything. This pear has a classic pale sheen and a 6mm diameter. It's the perfect piece to start off a pearl jewellery collection!

If traditional pearl shapes are not quite to your taste, you may prefer the elegant sheen of mother of pearl instead. It carries the shame luxurious colouring of a pearl, but can be a lot more creative in its jewellery design.

Inspired by the shape of the delicate Lunaria flower, this luxury gold and mother of pearl bracelet is hammered and hand engraved by Italian artisans, meaning no two pieces are ever the same.

visit us for more pearl pieces

We would love to see you in one of our Burrells stores, to have the opportunity to show you our incredible pearl collection. Visit us today and try on some of these luxurious pieces for yourself! 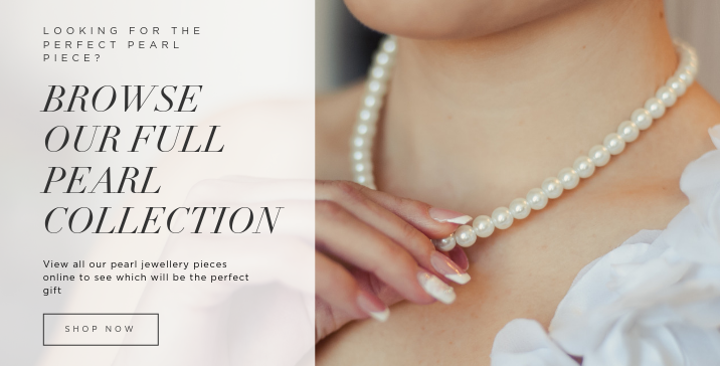